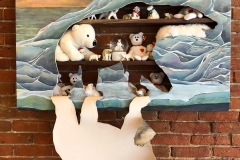 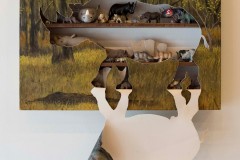 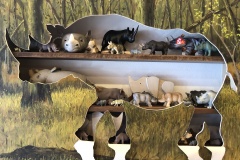 With only 2,500 black rhinos left on the planet, there are more plastic, toy and décor rhinos on earth than the actual animal itself. Considering that plastic is one of the leading causes of animal extinction, the manufactured, plastic animal is outliving the living, breathing animal itself.

The Displaced pieces began as paintings of the endangered animal in its natural habitat before removal through the act of cutting to reveal plastic toy and décor rhinos in a shelving unit built into the canvas. The canvas silhouette of the body hangs off the work, creating tension of removal or extinction. These works mourn the fading existence of animals and examine materialism’s role in decontextualization of the animal.