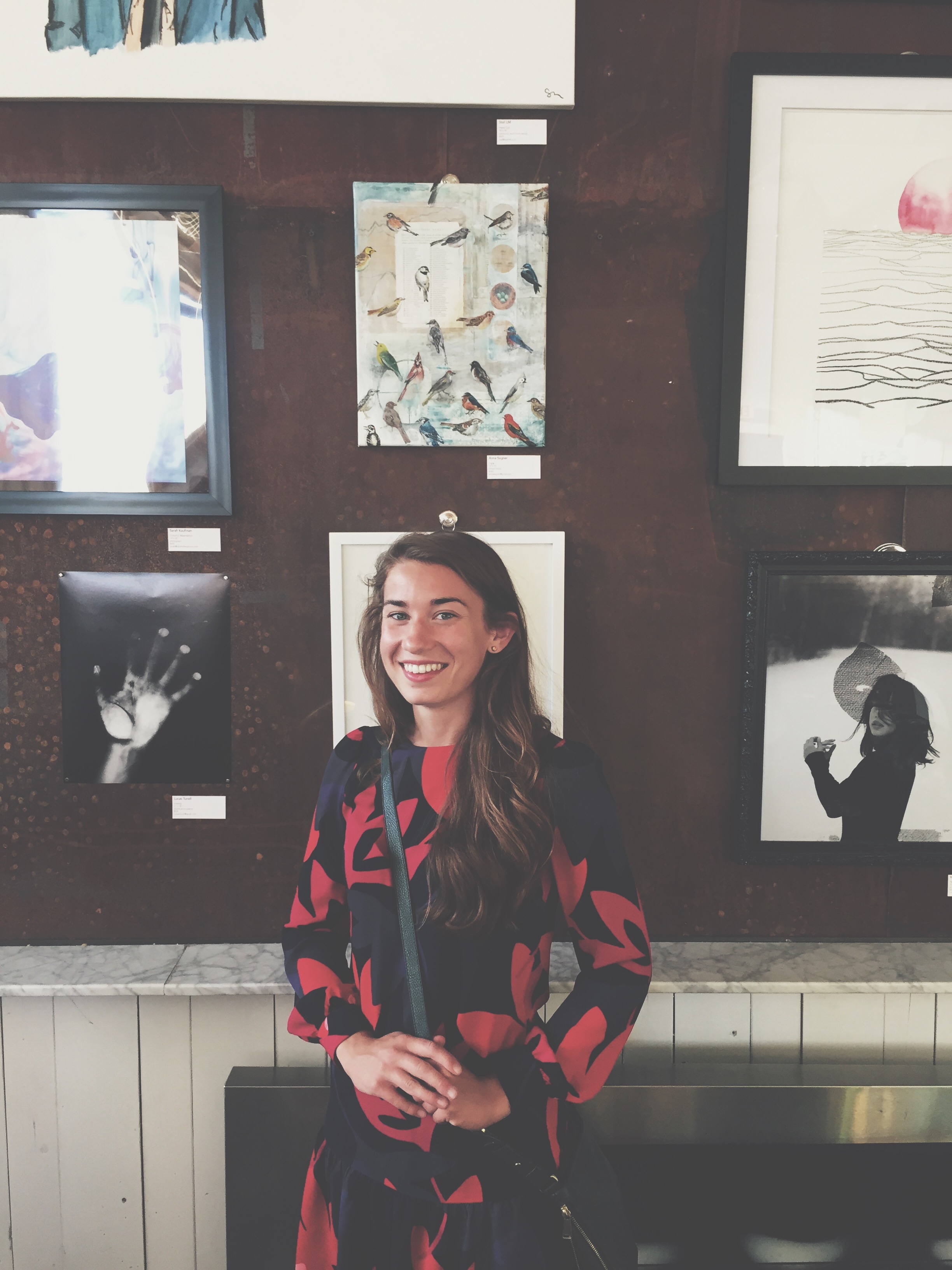 Photo of me at juried group show at Norseman Distillery in Minneapolis.

Anna Segner is a painter, writer, drawing instructor, and a freshly minted MFA artist from the Integrated Visual Arts program at Iowa State University. This fall, Anna will be teaching drawing full-time at ISU.
Anna graduated from Saint Mary’s University of Minnesota in 2015 with a Bachelor of Arts in Literature with Writing Emphasis and Studio Art. Before graduate studies, she worked as a newspaper reporter in Owatonna, MN (her hometown). In her artwork, Anna incorporates critical animal studies and other research to question the human act of “toying” with animals and the artificial approach to replacing the lost wild.
Anna has gained professional exposure through participation in both regional and national juried exhibitions and solo exhibitions. Currently, Anna is a part of a group exhibition, “Dear Earth” at Woman Made Gallery in Chicago, IL. This summer, she is also thrilled to be working with ISU faculty on 20 Artists 20 Parks, an artist residency program celebrating the 100th birthday of Iowa State Parks in coordination with Iowa Department of Natural Resources, Iowa Arts Council and Iowa State University.

As children play with animal toys, they displace the animals’ natural context, habitat, agency, and behaviors. With playthings, children are encouraged to enact fictitious narratives that rely on speciesism and anthropomorphized clichés, further divorcing animals from their natural realities and anatomies. While the word “toy” suggests diminutive size and concomitant diminution of importance, to “toy” with something means to mess with or manipulate. Because toys reflect and teach values of a society, child’s play forms animal perceptions and misconceptions that are perpetuated into adulthood. It is troubling that adults treat animals as toys—put where wherever, admired when in the mood, ignored when fixated on something else, and tossed out when outgrown. Ironically, as humans long for a wildness that is less and less present in daily life, artificial nature is brought into the home through (textile pattern, wallpaper, décor, toys, etc.). Clearly, humans value nature and animals but have lost touch with true experiences of the wilderness.

My work utilizes toys in intricate still lives, assemblages, and installation to create work that considers animal toys as playthings stripped of agency and reduced to toy features. Cut out paintings of animal images disassociate the organisms in their environment, leaving a void replaced by toys. Many paintings depict animal toys among domestic spaces and everyday objects that also evoke nature themes, such as intricate wallpapers, patterns, and décor. Use of collaged textile and text speak to the illusion of these items. Mixed media paintings invite viewers to question the human act of “toying” with animals as well as reflect on the complexity of humans’ artificial approach to replacing the lost wild.